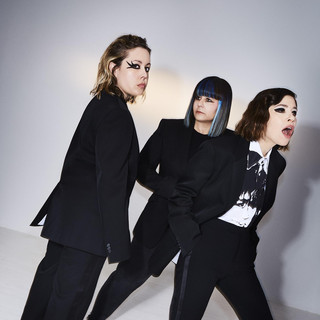 Riot grrrl is an underground feminist punk movement that began in the early 1990s in Washington state (particularly Olympia) and the greater Pacific Northwest. It also had origins in Washington, D.C., and spread to at least 26 countries. It is a subcultural movement that combines feminist consciousness and punk style and politics. It is often associated with third-wave feminism, which is sometimes seen as having grown out of the Riot Grrrl movement. It has also been described as a musical genre that came out of indie rock, with the punk scene serving as an inspiration for a musical movement in which women could express themselves in the same way men had been doing for the past several years.Riot grrrl bands often address issues such as rape, domestic abuse, sexuality, racism, patriarchy, classism, anarchism and female empowerment. Primary bands associated with the movement include Bikini Kill, Bratmobile, Heavens to Betsy, Excuse 17, Huggy Bear, Skinned Teen, Emily's Sassy Lime and Sleater-Kinney, as well as queercore groups like Team Dresch and The Third Sex. In addition to a music scene and genre, riot grrrl is a subculture involving a DIY ethic, zines, art, political action, and activism. The riot grrrl movement quickly spread well beyond its musical roots to create vibrant “zine” and Internet-based movement, complete with local meetings and grassroots organizing to end ageism, homophobia, weightism, racism, sexism and, especially, physical and emotional violence against women and girls. Riot grrrls are known to hold meetings, start chapters, and support and organize women in music.


This article uses material from the Wikipedia article Riot grrrl , which is released under the Creative Commons Attribution-Share-Alike License 3.0.