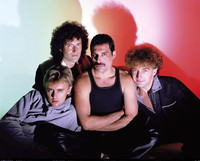 Hard rock is a loosely defined subgenre of rock music that began in the mid-1960s, with the garage, psychedelic and blues rock movements. It is typified by a heavy use of aggressive vocals, distorted electric guitars, bass guitar, drums, and often accompanied with keyboards. Hard rock developed into a major form of popular music in the 1970s, with bands such as the Who, Led Zeppelin, Deep Purple, Aerosmith, Kiss, Queen, AC/DC and Van Halen. During the 1980s, some hard rock bands moved away from their hard rock roots and more towards pop rock, while others began to return to a hard rock sound. Established bands made a comeback in the mid-1980s and it reached a commercial peak in the 1980s, with glam metal bands like Bon Jovi, and Def Leppard and the rawer sounds of Guns N' Roses and Vengeance (band), which followed up with great success in the later part of that decade. Hard rock began losing popularity with the commercial success of R&B, hip-hop, urban pop, grunge and later Britpop in the 1990s. Despite this, many post-grunge bands adopted a hard rock sound and in the 2000s there came a renewed interest in established bands, attempts at a revival, and new hard rock bands that emerged from the garage rock and post-punk revival scenes. Out of this movement came garage rock bands like the White Stripes, the Strokes, Interpol and, later on, the Black Keys. In the 2000s, only a few hard rock bands from the 1970s and 1980s managed to sustain highly successful recording careers.


This article uses material from the Wikipedia article Hard rock , which is released under the Creative Commons Attribution-Share-Alike License 3.0.