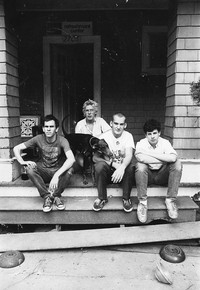 Straight edge (sometimes abbreviated as sXe or signified by XXX or X) is a subculture originated from hardcore punk whose adherents refrain from using alcohol, tobacco and other recreational drugs, in reaction to the excesses of punk subculture. For some, this extends to refraining from engaging in promiscuous sex, following a vegetarian or vegan diet or not using caffeine or prescription drugs. The term straight edge was adopted from the 1981 song "Straight Edge" by the hardcore punk band Minor Threat.Straight edge emerged amid the early-1980s hardcore punk scene. Since then, a wide variety of beliefs and ideas have been associated with some members of the movement, including vegetarianism and animal rights. While the commonly expressed aspects of the straight edge subculture have been abstinence from alcohol, nicotine, and illegal drugs, there have been considerable variations on how far to take the interpretations of "abstaining from intoxicants" or "living drug-free". Disagreements often arise as to the primary reasons for living straight edge. Though Straight Edge politics have varied significantly, from explicitly revolutionary to outright conservative, the latter has mostly dominated, at least in public perception. Left leaning activists have often approached Straight Edge with skepticism, ridicule or even outright hostility in part due to what they perceived as the Straight Edge movement's self-righteous militancy. In 1999, William Tsitsos wrote that straight edge had gone through three eras since its founding in the early 1980s. Bent edge began as a counter-movement to straight edge by members of the Washington, D.C. hardcore scene who were frustrated by the rigidity and intolerance in the scene. During the youth crew era, which started in the mid-1980s, the influence of music on the straight edge scene was at an all-time high. By the early 1990s, militant straight edge was a well-known part of the wider punk scene. In the early to mid-1990s, straight edge spread from the United States to Northern Europe, Eastern Europe, the Middle East, and South America. By the beginning of the 2000s, militant straight edge punks had largely left the broader straight edge culture and movement.


This article uses material from the Wikipedia article Straight edge , which is released under the Creative Commons Attribution-Share-Alike License 3.0.