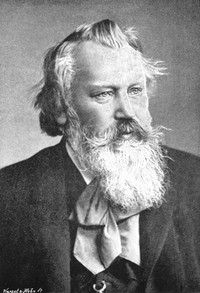 A sonatina is literally a small sonata. As a musical term, sonatina has no single strict definition; it is rather a title applied by the composer to a piece that is in basic sonata form, but is shorter and lighter in character, or technically more elementary, than a typical sonata. The term has been in use at least since the late baroque; there is a one-page, one-movement harpsichord piece by Handel called "Sonatina". It is most often applied to solo keyboard works, but a number of composers have written sonatinas for violin and piano (see list under Violin sonata), e.g. Sonatina in G major for Violin and Piano by Antonín Dvořák, and occasionally for other instruments, e.g. the Clarinet Sonatina by Malcolm Arnold. The title "Sonatina" was used occasionally by J.S. Bach for short orchestral introductions to large vocal works, as in his cantata Gottes Zeit ist die allerbeste Zeit, BWV 106, a practice with precedent in the work of the earlier German composer Nicolaus Bruhns. This is the only sense in which Bach used the term sonatina, although he composed many chamber and solo sonatas for various instruments. As with many musical terms, sonatina is used inconsistently. The most common meaning is a short, easy sonata suitable for students, such as the piano sonatinas of Clementi. However, by no means are all sonatinas technically undemanding, for example the virtuoso sonatinas of Busoni and Alkan, and the Sonatine of Ravel, whose title reflects its neo-classical quality. On the other hand, some sonatas could equally have been called sonatinas: for example Beethoven's Op. 49, titled by the composer "Zwei Leichte Sonaten für das Pianoforte" ("Two Easy Sonatas for Piano") comprise only two short movements each, a sonata-allegro and a short rondo (No. 1) or minuet (No. 2), all well within the grasp of the intermediate student. However, other works titled "Sonatina", such as the Sonatina in F major, have been attributed to Beethoven. In general, a sonatina will have one or more of the following characteristics: brevity; fewer movements than the four of the late classical sonata; technical simplicity; a lighter, less serious character; and (in post-romantic music) a neo-classical style or a reference to earlier music. Muzio Clementi's sonatinas op. 36 are very popular among students. The first (or only) movement is generally in an abbreviated sonata form, with little or no development of the themes. For this reason, a sonatina is sometimes defined, especially in British usage, as a short piece in sonata form in which the development section is quite perfunctory or entirely absent: the exposition is followed immediately by a brief bridge passage to modulate back to the home key for the recapitulation. Subsequent movements (at most two) may be in any of the common forms: e.g. a minuet or scherzo, a slow theme-and-variations, or a rondo.


This article uses material from the Wikipedia article Sonatina , which is released under the Creative Commons Attribution-Share-Alike License 3.0.