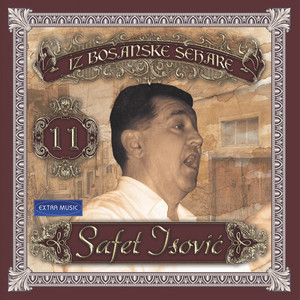 Sevdalinka (pronounced [seʋdǎliːŋka]) (also known as Sevdah music) is a traditional genre of folk music from Bosnia and Herzegovina. Sevdalinka is an integral part of the Bosniak culture, but is also spread across the ex-Yugoslavia region, including Croatia, Montenegro, North Macedonia and Serbia. The actual composers of many Sevdalinka songs are largely unknown because these are traditional folk songs. In a musical sense, Sevdalinka is characterized by a slow or moderate tempo and intense, emotional melodies. Sevdalinka songs are very elaborate, emotionally charged and are traditionally sung with passion and fervor. The combination of Oriental, European and Sephardic elements make this type of music stand out among other types of folk music from the Balkans. Just like a majority of Balkan folk music, Sevdalinka features very somber, minor-sounding modes, but unlike other types of Balkan folklore music it more intensely features minor second intervals, thus hinting at Oriental makams and the Phrygian mode. As a result, the melodies are noted for leaving a strong melancholic feeling with the listener. The singer will often impose the rhythm and tempo of the song, both of which can vary throughout the song. Traditionally, Sevdalinka-s are women's songs, most addressing the issue of love and longing, unfulfilled and unfortunate love, some touch on a woman's physical desire for her loved one, and some have various comic elements. There are Sevdah songs written and sung by men as well. Traditionally, they were performed without any instrument, hence their elaborate melody. As with most old folk styles, it is pure assumption what the sound of original melodies were like, as in modern days their interpretations are fully aligned to the Western chromatic system due to instruments used for accompaniment (whereas Oriental modes often use intervals smaller than a semitone). Modern interpretations are followed by a small orchestra featuring the accordion (as the most prominent instrument), the violin, nylon-string guitars and/or other string instruments, occasionally (such as oud, saz or šargija), the flute or clarinet (occasionally), upright bass and the snare drum. In modern interpretations, between the verses, an accordion or violin solo can almost always be heard.


This article uses material from the Wikipedia article Sevdalinka , which is released under the Creative Commons Attribution-Share-Alike License 3.0.