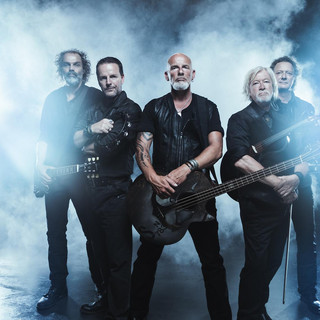 A sea shanty, chantey, or chanty is a type of work song that was once commonly sung to accompany labor on board large merchant sailing vessels. The term shanty most accurately refers to a specific style of work song belonging to this historical repertoire. However, in recent, popular usage, the scope of its definition is sometimes expanded to admit a wider range of repertoire and characteristics, or to refer to a "maritime work song" in general. Of uncertain etymological origin, the word shanty emerged in the mid-19th century in reference to an appreciably distinct genre of work song, developed especially in American-style merchant vessels that had come to prominence in the decades prior to the American Civil War. Shanty songs functioned to synchronize and thereby economize labor in what had then become larger vessels having smaller crews and operating on stricter schedules. The practice of singing shanties eventually became ubiquitous internationally and throughout the era of wind-driven packet and clipper ships. Shanties had antecedents in the working chants of British and other national maritime traditions such as those sung while manually loading vessels with cotton in ports of the southern United States. Shanty repertoire borrowed from the contemporary popular music enjoyed by sailors, including minstrel music, popular marches, and land-based folk songs, which were adapted to suit musical forms matching the various labor tasks required to operate a sailing ship. Such tasks, which usually required a coordinated group effort in either a pulling or pushing action, included weighing anchor and setting sail. The shanty genre was typified by flexible lyrical forms, which in practice provided for much improvisation and the ability to lengthen or shorten a song to match the circumstances. Its hallmark was call and response, performed between a soloist and the rest of the workers in chorus. The leader, called the shantyman, was appreciated for his piquant language, lyrical wit, and strong voice. Shanties were sung without instrumental accompaniment and, historically speaking, they were only sung in work-based rather than entertainment-oriented contexts. Although most prominent in English, shanties have been created in or translated into other European languages. The switch to steam-powered ships and the use of machines for shipboard tasks, by the end of the 19th century, meant that shanties gradually ceased to serve a practical function. Their use as work songs became negligible in the first half of the 20th century. Information about shanties was preserved by veteran sailors and by folklorist song-collectors, and their written and audio-recorded work provided resources that would later support a revival in singing shanties as a land-based leisure activity. Commercial musical recordings, popular literature, and other media, especially since the 1920s, have inspired interest in shanties among landlubbers. The modern performance contexts of these songs have affected their forms, their content, and the way they are understood as cultural and historical artifacts. Recent performances range from the "traditional" style of practitioners within a revival-oriented, maritime music scene, to the adoption of shanty repertoire by musicians in a variety of popular styles.


This article uses material from the Wikipedia article Sea shanty , which is released under the Creative Commons Attribution-Share-Alike License 3.0.