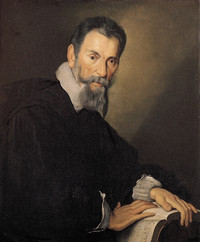 Renaissance music is vocal and instrumental music written and performed in Europe during the Renaissance era. Consensus among music historians has been to start the era around 1400, with the end of the medieval era, and to close it around 1600, with the beginning of the Baroque period, therefore commencing the musical Renaissance about a hundred years after the beginning of the Renaissance as it is understood in other disciplines. As in the other arts, the music of the period was significantly influenced by the developments which define the Early Modern period: the rise of humanistic thought; the recovery of the literary and artistic heritage of Ancient Greece and Ancient Rome; increased innovation and discovery; the growth of commercial enterprises; the rise of a bourgeois class; and the Protestant Reformation. From this changing society emerged a common, unifying musical language, in particular, the polyphonic style (this means music with multiple, independent melody lines performed simultaneously) of the Franco-Flemish school, whose greatest master was Josquin des Prez. The invention of the printing press in 1439 made it cheaper and easier to distribute music and musical theory texts on a wider geographic scale and to more people. Prior to the invention of printing, written music and music-theory texts had to be hand-copied, a time-consuming and expensive process. Demand for music as entertainment and as a leisure activity for educated amateurs increased with the emergence of a bourgeois class. Dissemination of chansons, motets, and masses throughout Europe coincided with the unification of polyphonic practice into the fluid style which culminated in the second half of the sixteenth century in the work of composers such as Giovanni Pierluigi da Palestrina, Orlande de Lassus, Thomas Tallis and William Byrd. Relative political stability and prosperity in the Low Countries, along with a flourishing system of music education in the area's many churches and cathedrals allowed the training of large numbers of singers, instrumentalists, and composers. These musicians were highly sought throughout Europe, particularly in Italy, where churches and aristocratic courts hired them as composers, performers, and teachers. Since the printing press made it easier to disseminate printed music, by the end of the 16th century, Italy had absorbed the northern musical influences with Venice, Rome, and other cities becoming centers of musical activity. This reversed the situation from a hundred years earlier. Opera, a dramatic staged genre in which singers are accompanied by instruments, arose at this time in Florence. Opera was developed as a deliberate attempt to resurrect the music of ancient Greece (OED 2005). Music was increasingly freed from medieval constraints, and more variety was permitted in range, rhythm, harmony, form, and notation. On the other hand, rules of counterpoint became more constrained, particularly with regard to treatment of dissonances. In the Renaissance, music became a vehicle for personal expression. Composers found ways to make vocal music more expressive of the texts they were setting. Secular music (non-religious music) absorbed techniques from sacred music, and vice versa. Popular secular forms such as the chanson and madrigal spread throughout Europe. Courts employed virtuoso performers, both singers and instrumentalists. Music also became more self-sufficient with its availability in printed form, existing for its own sake. Precursor versions of many familiar modern instruments (including the violin, guitar, lute and keyboard instruments) developed into new forms during the Renaissance. These instruments were modified to responding to the evolution of musical ideas, and they presented new possibilities for composers and musicians to explore. Early forms of modern woodwind and brass instruments like the bassoon and trombone also appeared; extending the range of sonic color and increasing the sound of instrumental ensembles. During the 15th century, the sound of full triads (three note chords) became common, and towards the end of the 16th century the system of church modes began to break down entirely, giving way to the functional tonality (the system in which songs and pieces are based on musical "keys"), which would dominate Western art music for the next three centuries. From the Renaissance era, notated secular and sacred music survives in quantity, including vocal and instrumental works and mixed vocal/instrumental works. An enormous diversity of musical styles and genres flourished during the Renaissance. These can be heard on recordings made in the 20th and 21st century, including masses, motets, madrigals, chansons, accompanied songs, instrumental dances, and many others. Beginning in the late 20th century, numerous early music ensembles were formed. Early music ensembles specializing in music of the Renaissance era give concert tours and make recordings, using modern reproductions of historical instruments and using singing and performing styles which musicologists believe were used during the era.


This article uses material from the Wikipedia article Renaissance music , which is released under the Creative Commons Attribution-Share-Alike License 3.0.