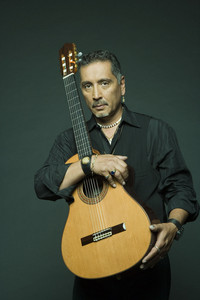 New flamenco (or nuevo flamenco) is synonymous with modern flamenco and is a derivative of traditional flamenco. It combines flamenco guitar virtuosity with musical fusion. Jazz, rumba, bossa nova, Gypsy, Latin, Middle Eastern, rock, Cuban swing, tango, salsa and especially blues have all been fused into flamenco by different artists to produce its sound.Traditional flamenco had been displaced in Spain in the 1950s and 1960s by rock-and-roll. Artists such as Camarón de la Isla worked with the music during that period, infusing it with new sound. However it was during the 1980s that revival really took off, by artists such as Paco de Lucía, Nina Corti, Pata Negra, Ketama, and later more mainstream stylists, such as the Gipsy Kings. The artists fused it with other forms, including jazz and salsa. Although fused with other music, it was still based on the classic flamenco the artists had grown up with, a new form of the old. Among the artists wrongly associated with this style is Ottmar Liebert. Another example is the duo Strunz & Farah, who, in an interview in Guitar Player magazine, strenuously denied that their music was a form of flamenco, whilst acknowledging an influence.


This article uses material from the Wikipedia article New flamenco , which is released under the Creative Commons Attribution-Share-Alike License 3.0.