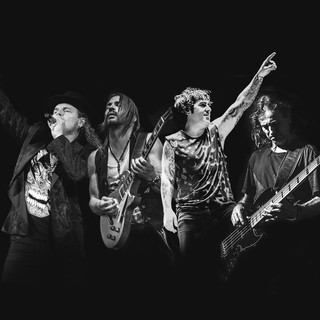 Mexican rock music, often referred to in Mexico as rock nacional ("national rock"), originated in the 1950s. Standards by Chuck Berry, Elvis Presley and The Everly Brothers were soon covered by bands such as Los Rockets, Los Twisters, Los Teen Tops, Los Rebeldes del Rock, Los Locos del Ritmo, Los Crazy Boys, Los Apson, Los Nómadas, and Javier Bátiz, which later led to original compositions, often in English. The group "Los Nómadas" was the first racially integrated band of the 1950s. Their lead guitarist, Bill Aken (adopted son of Lupe Mayorga, effectively making Aken the cousin of Ritchie Valens), wrote most of their original material, including the raucous Donde-Donde, and co-wrote the material for their Sounds Of The Barrio album, which is still being sold. Their 1954 recording of She's My Babe was the first top 40 R&B recording by a Latino band. In the southwestern United States, Spanish guitar rhythms and Mexican musical influences may have inspired some of the music of American musicians Ritchie Valens, Danny Flores (of The Champs), Sam the Sham, Roy Orbison and later, Herb Alpert. Initially, the public exhibited only moderate interest in them, because the media attention was focused on La Ola Inglesa (British Invasion). However, after the substantial success of Mexican-American guitarist Carlos Santana in the United States in the late 1960s, along with the successful development of Mexico's own counterculture movement called La Onda (The Wave), a large number of bands sprang up. Most of these bands sang in both Spanish and English, keeping foreign commercial exposure in mind. Mexican and Chicano rock have crossed into other Hispanic groups like José Feliciano and Lourdes Rodriguez, of Puerto Rican descent.


This article uses material from the Wikipedia article Rock music in Mexico , which is released under the Creative Commons Attribution-Share-Alike License 3.0.