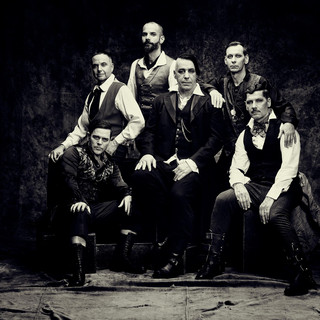 Industrial music is a genre of experimental music which draws on harsh, transgressive or provocative sounds and themes. AllMusic defines industrial music as the "most abrasive and aggressive fusion of rock and electronic music" that was "initially a blend of avant-garde electronics experiments (tape music, musique concrète, white noise, synthesizers, sequencers, etc.) and punk provocation". The term was coined in the mid-1970s with the founding of Industrial Records by members of Throbbing Gristle and Monte Cazazza. While the genre name originated with Throbbing Gristle's emergence in the United Kingdom, concentrations of artists and labels vital to the genre also emerged in Chicago. The first industrial artists experimented with noise and aesthetically controversial topics, musically and visually, such as fascism, sexual perversion, and the occult. Prominent industrial musicians include Throbbing Gristle, Monte Cazazza, SPK, Boyd Rice, Cabaret Voltaire, and Z'EV. On Throbbing Gristle's 1977 debut album The Second Annual Report, they coined the slogan "industrial music for industrial people". Chicago-based independent label Wax Trax Records featured a heavy roster of industrial music acts. The precursors that influenced the development of the genre included acts such as electronic music group Kraftwerk, experimental rock acts such as Pink Floyd and Frank Zappa, psychedelic rock artists such as Jimi Hendrix, and composers such as John Cage. Musicians also cite writers such as William S. Burroughs, and philosophers such as Friedrich Nietzsche as influences. While the term was self-applied by a small coterie of groups and individuals associated with Industrial Records in the late 1970s, it was broadened to include artists influenced by the original movement or using an "industrial" aesthetic. A few years later in the 1980s, artists on Chicago-based Wax Trax Records such as Front 242, KMFDM, Front Line Assembly, Ministry, and Sister Machine Gun gained prominence on the industrial music scene. Over time, the genre's influence spread into and blended with styles including ambient and rock. Electro-industrial music is a primary subgenre that developed in the 1980s. The two other most notable hybrid genres are industrial rock and industrial metal, which include bands such as Nine Inch Nails and Ministry, both of which released platinum-selling albums in the 1990s. These distinct genres are often referred to as simply industrial.


This article uses material from the Wikipedia article Industrial music , which is released under the Creative Commons Attribution-Share-Alike License 3.0.