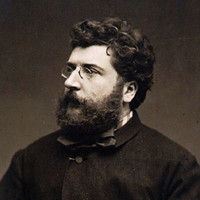 French opera is one of Europe's most important operatic traditions, containing works by composers of the stature of Rameau, Berlioz, Gounod, Bizet, Massenet, Debussy, Ravel, Poulenc and Messiaen. Many foreign-born composers have played a part in the French tradition as well, including Lully, Gluck, Salieri, Cherubini, Spontini, Meyerbeer, Rossini, Donizetti, Verdi and Offenbach. French opera began at the court of Louis XIV of France with Jean-Baptiste Lully's Cadmus et Hermione (1673), although there had been various experiments with the form before that, most notably Pomone by Robert Cambert. Lully and his librettist Quinault created tragédie en musique, a form in which dance music and choral writing were particularly prominent. Lully's most important successor was Rameau. After Rameau's death, the German Gluck was persuaded to produce six operas for the Parisian stage in the 1770s. They show the influence of Rameau, but simplified and with greater focus on the drama. At the same time, by the middle of the 18th century another genre was gaining popularity in France: opéra comique, in which arias alternated with spoken dialogue. By the 1820s, Gluckian influence in France had given way to a taste for the operas of Rossini. Rossini's Guillaume Tell helped found the new genre of Grand opera, a form whose most famous exponent was Giacomo Meyerbeer. Lighter opéra comique also enjoyed tremendous success in the hands of Boïeldieu, Auber, Hérold and Adam. In this climate, the operas of the French-born composer Hector Berlioz struggled to gain a hearing. Berlioz's epic masterpiece Les Troyens, the culmination of the Gluckian tradition, was not given a full performance for almost a hundred years after it was written. In the second half of the 19th century, Jacques Offenbach dominated the new genre of operetta with witty and cynical works such as Orphée aux enfers; Charles Gounod scored a massive success with Faust; and Georges Bizet composed Carmen, probably the most famous French opera of all. At the same time, the influence of Richard Wagner was felt as a challenge to the French tradition. Perhaps the most interesting response to Wagnerian influence was Claude Debussy's unique operatic masterpiece Pelléas et Mélisande (1902). Other notable 20th-century names include Ravel, Poulenc and Messiaen.


This article uses material from the Wikipedia article French opera , which is released under the Creative Commons Attribution-Share-Alike License 3.0.