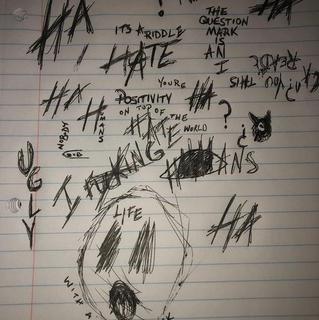 Emo is a rock music genre characterized by an emphasis on emotional expression, sometimes through confessional lyrics. It emerged as a style of post-hardcore from the mid-1980s hardcore punk movement in Washington, D.C., where it was known as emotional hardcore or emocore and pioneered by bands such as Rites of Spring and Embrace. In the early–mid 1990s, emo was adopted and reinvented by alternative rock, indie rock and pop punk bands such as Sunny Day Real Estate, Jawbreaker, Weezer and Jimmy Eat World, with Weezer breaking into the mainstream during this time. By the mid-1990s, bands such as Braid, the Promise Ring and the Get Up Kids emerged from the burgeoning Midwest emo scene, and several independent record labels began to specialize in the genre. Meanwhile, screamo, a more aggressive style of emo using screamed vocals, also emerged, pioneered by the San Diego bands Heroin and Antioch Arrow. Often seen as a subculture, emo also signifies a specific relationship between fans and artists and certain aspects of fashion, culture and behavior. Emo fashion has been associated with skinny jeans; tight t-shirts with band names; studded belts; and flat, straight, jet-black hair with long bangs. Fans of emo music who dress like this are referred to as "emo kids" or "emos". Emos are known for listening to emo bands like My Chemical Romance, Hawthorne Heights, The Used, and AFI. The emo subculture is stereotypically associated with emotion, sensitivity, misanthropy, shyness, introversion and angst, as well as depression, self-harm and suicide. Its quick rise in popularity in the early 2000s inspired a backlash, with bands such as My Chemical Romance and Panic! at the Disco rejecting the emo label because of the social stigma and controversy surrounding it. Emo entered mainstream culture in the early 2000s with the success of Jimmy Eat World and Dashboard Confessional and many artists signed to major record labels. Bands such as My Chemical Romance, AFI, Fall Out Boy and the Red Jumpsuit Apparatus continued the genre's popularity during the rest of the decade. By the mid 2010s, emo's popularity waned, with some groups changing their sound and others disbanding. Meanwhile, however, a mainly underground emo revival emerged, with bands such as The World Is a Beautiful Place & I Am No Longer Afraid to Die and Modern Baseball drawing on the sound and aesthetic of 1990s emo.


This article uses material from the Wikipedia article Emo , which is released under the Creative Commons Attribution-Share-Alike License 3.0.