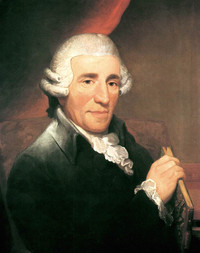 The Classical period was an era of classical music between roughly 1730 and 1820.The Classical period falls between the Baroque and the Romantic periods. Classical music has a lighter, clearer texture than Baroque music and is less complex. It is mainly homophonic, using a clear melody line over a subordinate chordal accompaniment, but counterpoint was by no means forgotten, especially later in the period. It also makes use of style galant which emphasized light elegance in place of the Baroque's dignified seriousness and impressive grandeur. Variety and contrast within a piece became more pronounced than before and the orchestra increased in size, range, and power. The harpsichord was replaced as the main keyboard instrument by the piano (or fortepiano). Unlike the harpsichord, which plucked strings with quills, pianos strike the strings with leather-covered hammers when the keys are pressed, which enables the performer to play louder or softer and play with more expression; in contrast, the force with which a performer plays the harpsichord keys does not change the sound. Instrumental music was considered important by Classical period composers. The main kinds of instrumental music were the sonata, trio, string quartet, symphony (performed by an orchestra) and the solo concerto, which featured a virtuoso solo performer playing a solo work for violin, piano, flute, or another instrument, accompanied by an orchestra. Vocal music, such as songs for a singer and piano (notably the work of Schubert), choral works, and opera (a staged dramatic work for singers and orchestra) were also important during this period. The best-known composers from this period are Joseph Haydn, Wolfgang Amadeus Mozart, Ludwig van Beethoven, and Franz Schubert; other notable names include Luigi Boccherini, Muzio Clementi, Antonio Salieri, Leopold Mozart, Johann Christian Bach, Carl Philipp Emanuel Bach, and Christoph Willibald Gluck. Ludwig van Beethoven is regarded either as a Romantic composer or a Classical period composer who was part of the transition to the Romantic era. Franz Schubert is also a transitional figure, as were Johann Nepomuk Hummel, Luigi Cherubini, Gaspare Spontini, Gioachino Rossini, Carl Maria von Weber and Nicolo Paganini. The period is sometimes referred to as the era of Viennese Classic or Classicism (German: Wiener Klassik), since Gluck, Mozart, Haydn, Salieri, Schubert, and Beethoven all worked in Vienna.


This article uses material from the Wikipedia article Classical period (music) , which is released under the Creative Commons Attribution-Share-Alike License 3.0.