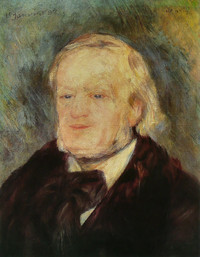 A choral symphony is a musical composition for orchestra, choir, and sometimes solo vocalists that, in its internal workings and overall musical architecture, adheres broadly to symphonic musical form. The term "choral symphony" in this context was coined by Hector Berlioz when he described his Roméo et Juliette as such in his five-paragraph introduction to that work. The direct antecedent for the choral symphony is Ludwig van Beethoven's Ninth Symphony. Beethoven's Ninth incorporates part of the Ode an die Freude ("Ode to Joy"), a poem by Friedrich Schiller, with text sung by soloists and chorus in the last movement. It is the first example of a major composer's use of the human voice on the same level as instruments in a symphony.A few 19th-century composers, notably Felix Mendelssohn and Franz Liszt, followed Beethoven in producing choral symphonic works. Notable works in the genre were produced in the 20th century by Gustav Mahler, Sergei Rachmaninoff, Igor Stravinsky, Ralph Vaughan Williams, Benjamin Britten and Dmitri Shostakovich, among others. The final years of the 20th century and the opening of the 21st century have seen several new works in this genre, among them compositions by Peter Maxwell Davies, Tan Dun, Philip Glass, Hans Werner Henze, Krzysztof Penderecki, William Bolcom and Robert Strassburg.The term "choral symphony" indicates the composer's intention that the work be symphonic, even with its fusion of narrative or dramatic elements that stems from the inclusion of words. To this end, the words are often treated symphonically to pursue non-narrative ends, by use of frequent repetition of important words and phrases, and the transposing, reordering or omission of passages of the set text. The text often determines the basic symphonic outline, while the orchestra's role in conveying the musical ideas is similar in importance to that of the chorus and soloists. Even with a symphonic emphasis, a choral symphony is often influenced in musical form and content by an external narrative, even in parts where there is no singing.


This article uses material from the Wikipedia article Choral symphony , which is released under the Creative Commons Attribution-Share-Alike License 3.0.