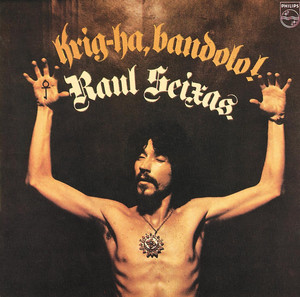 The baião (Portuguese pronunciation: [baˈjɐ̃w]) is a Northeast Brazilian rhythmic formula that became the basis of a wide range of music. Forró and coco (or embolada) are clear examples. The main baião instrument is the zabumba, a flat, double-headed bass drum played with a mallet in one hand and stick in the other, each striking the opposite head of the drum. The baião originated with the native peoples in the Northeast but now incorporates elements of indigenous, mestizo, African, and European musics. Grossly, the indigenous elements are flutes and wooden shakers; African-influenced baiãos are accompanied with atabaque drums and include overlapping call and response singing; and European influences include dance music such as the polka, mazurka, schottische, and quadrille, as well as Portuguese contest singing and accompaniment with one or two pandeiros playing the baião rhythm. The baião is most associated with the State of Pernambuco, just north of Bahia. Despite the relatively small area that confines its popularity, a great variety of music is associated with baião. One only need listen to Gilberto Gil from Bahia, Luiz Gonzaga and Selma do Côco of Pernambuco, and any "repentista" singer from the region such as Perdal Lins and Verde Lins. Although samba and bossa nova are largely considered Brazil's national musics, no complete understanding of Brazil's music and culture can be had without taking into account the baião and its influences as far south as São Paulo and Rio de Janeiro. For example, singer Carmélia Alves, who was known as "Queen of Baião" and became one of the country's best known baião performers, was from Rio de Janeiro.The baião is very much a rural music and for a long time was avoided by the urban upper classes. Although not well known outside the region, with the release of the album by Quarteto Novo in 1967, all of whose band members were from the region, the style gained influence internationally, influencing songwriters and leading to various hit songs in the US, UK and Europe. The baião is also the dance which is danced to baião music. The baião was popularized with radio in the 1940s had its peak popularity in the 1950s, when Latin music in general was popular in the United States and Europe. One of the best known appears in the 1951 film Anna and is known both by íts original Spanish name El Negro Zumbón (The Jolly Black Man) and as Anna's Baión.


This article uses material from the Wikipedia article Baião (music) , which is released under the Creative Commons Attribution-Share-Alike License 3.0.