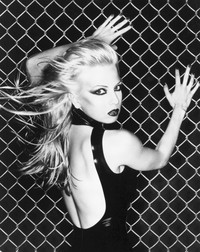 Top artists of B movie

A B movie or B film is a low-budget commercial motion picture that is not an arthouse film. In its original usage, during the Golden Age of Hollywood, the term more precisely identified films intended for distribution as the less-publicized bottom half of a double feature (akin to B-sides for recorded music). Although the U.S. production of movies intended as second features largely ceased by the end of the 1950s, the term B movie continues to be used in its broader sense to this day. In its post-Golden Age usage, there is ambiguity on both sides of the definition: on the one hand, the primary interest of many inexpensive exploitation films is prurient; on the other, many B movies display a high degree of craft and aesthetic ingenuity. In either usage, most B movies represent a particular genre—the Western was a Golden Age B movie staple, while low-budget science-fiction and horror films became more popular in the 1950s. Early B movies were often part of series in which the star repeatedly played the same character. Almost always shorter than the top-billed films they were paired with, many had running times of 70 minutes or less. The term connoted a general perception that B movies were inferior to the more lavishly budgeted headliners; individual B films were often ignored by critics. Latter-day B movies still sometimes inspire multiple sequels, but series are less common. As the average running time of top-of-the-line films increased, so did that of B pictures. In its current usage, the term has somewhat contradictory connotations: it may signal an opinion that a certain movie is (a) a genre film with minimal artistic ambitions or (b) a lively, energetic film uninhibited by the constraints imposed on more expensive projects and unburdened by the conventions of putatively "serious" independent film. The term is also now used loosely to refer to some higher-budgeted, mainstream films with exploitation-style content, usually in genres traditionally associated with the B movie. From their beginnings to the present day, B movies have provided opportunities both for those coming up in the profession and others whose careers are waning. Celebrated filmmakers such as Anthony Mann and Jonathan Demme learned their craft in B movies. They are where actors such as John Wayne and Jack Nicholson first became established, and they have provided work for former A movie actors, such as Vincent Price and Karen Black. Some actors, such as Bela Lugosi, Eddie Constantine, Bruce Campbell and Pam Grier, worked in B movies for most of their careers. The term B actor is sometimes used to refer to a performer who finds work primarily or exclusively in B pictures.


This article uses material from the Wikipedia article B movie , which is released under the Creative Commons Attribution-Share-Alike License 3.0.