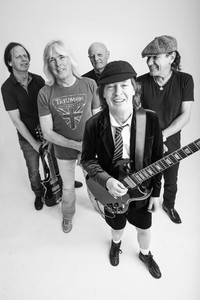 Australian rock, also called Oz rock, is rock music from Australia. The nation has a rich history of rock music and an appreciation of the roots of various rock genres, usually originating in the United States or Britain, but also continental Europe, and more recently the musical styles of Africa. Australian rock has also contributed to the development of some of these genres, as well as having its own unique Australiana sound with pub rock and its indigenous music. From 1955 to 1975 three distinct "waves" of Australian rock occurred. The first wave was from 1955 to 1963 and was influenced by American and British styles with local variants provided by artists such as Johnny O'Keefe, who had a hit with "Wild One", which appeared in July 1958. Late in that stage, clean-cut acts, which featured on TV's Bandstand and toured as the "Bandstand family", were representing local music on the record charts. The second wave from 1964 to 1969 was directly influenced by The Beatles and their tour of the country in June 1964. Two major acts from that era are The Easybeats and Bee Gees. A weekly magazine, Go-Set, which was published from 1966 to 1974, and aimed at teenagers and twenty-year-olds, quickly became the most influential and popular music-related publication of the period. The third wave from 1970 to 1975, with the advent of pub rock, was typified by early exponents, Billy Thorpe & The Aztecs, Blackfeather, and Buffalo. Internationally, AC/DC, which had started as a pub rock group in November 1973 has come to be the most well-known Australian rock band, with more than 71 million sales in the US alone by 2014.Beginning in that era was Countdown, which was a popular music TV program on national broadcaster, ABC, and ran from November 1974 until July 1987. After 1975 Australian rock began to diversify including local contributors to punk and indie rock styles. By the 1980s baby boomer acts were prominent, which included John Farnham, whose album, Whispering Jack (October 1986) peaked at number one on the Australian charts for 25 weeks and was certified 24x platinum indicating shipment of over 1.68 million copies – the highest by any Australian artist. Also in that decade, indigenous rock groups, Yothu Yindi and Warumpi Band, achieved wider recognition.


This article uses material from the Wikipedia article Rock music in Australia , which is released under the Creative Commons Attribution-Share-Alike License 3.0.